The Datum Universe as a Graph

A Directed Acyclic Graph (DAG) in a Transitive Reduction state 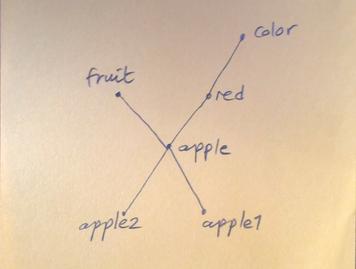 
The “is” relation is transitive. This means that if we have “a is b” and “b is c” then we can conclude that “a is c”. This conclusion is implicit and cannot be made explicit. In other words, If we try to add “a is c” to the Datum Universe, it will not be accepted as shown in Figure 2. 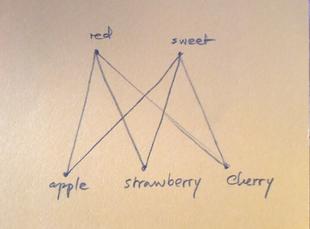 The Transitive Reduction property eliminates any redundant links and puts the DAG in a Transitive Reduction form. The Transitive Reduction form of a graph is unique and reduces the number of links to the minimum possible without affecting the information content in the graph [AHO]. We show that there is a further reduction in graph size by modifying the graph using an induction process. First, let’s recall the definition of a biclique (Figure 3) as a subgraph where there are two sets of vertices U and L, and every vertex in L is connected to every vertex in U. If the number of vertices are n and m respectively, then the biclique subgraph size is m*n. 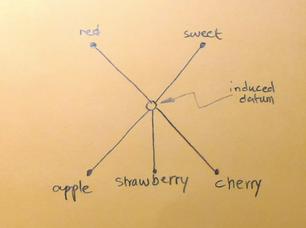 The induction process creates a new vertex (datum) and inserts it in the middle as in Figure 4. Even though the process increases the number of vertices by one, it actually reduces the size of the graph to m + n.

In our example, we create a new datum x and modify all the links as follows: x is red, x is sweet, apple is x, strawberry is x, cherry is x We have now reduced the subgraph size from 6 to 5 edges.

As the numbers of n and m increase, the savings in graph size becomes substantial. Therefore, the induction process decreases the amount of memory needed to store the datum universe content. Moreover, the new datum represents a class of all datums that are red and sweet. If a new red and sweet datum is added, it can be added as a value of the new class. This means that in the datum universe, the induction process is a classification as well as memory conservation process.


If we apply the induction process on the Datum Universe graph such that we eliminate all bicliques, we reach the minimal size of the graph. The resultant graph is equivalent to the original graph from a transitivity point of view. At this point, the graph becomes a Lattice since every two vertices have one Least Upper Bound element (LUB) and one Greatest Lower Bound element (GLB). The resultant lattice is not unique and depends on the order of induction. We elaborate on this process elsewhere.


The Katum and Objects

Strings, numbers, dates and other primitive data types are also datums but they are represented in their native form as objects. Exactly one or zero objects may be attached to a datum. In the examples given above all labels are objects. For example, "apple", "strawberry", "red", "sweet" are all string objects. The only datum that doesn't have an object is the induced datum in Figure 4. Notice that a katum is represented by a solid circle with a label showing its object while a datum is represented by a hollow circle.

A datum that has an object attached is called Katum. Because of the object attached to it, a katum is more concrete to us than a datum which represents an abstract class. 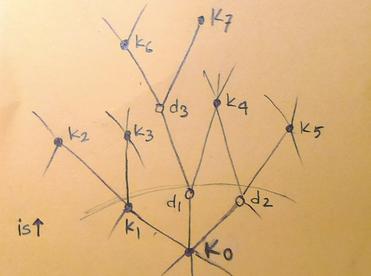 The Value set and the Instance sets are the mirror images of the Class set and the Attribute set and are not shown.

For more on these sets and other derived sets, see the two white papers.


A quick tutorial to the Datumtron API. Providing code to query a converted MS-Northwind database and showing a datamining example.

What is the most fundamental element of knowledge?


A brief introduction to the Datum Universe Model which is the theory behind the Datumtron API.

A Biclique is a graph whose vertices can be partitioned into two subsets V1 and V2 such that no edge has both endpoints in the same subset, and every possible edge that could connect vertices in different subsets is part of the graph. That is, it is a bipartite graph (V1, V2, E) such that for every two vertices v1 ∈ V1 and v2 ∈ V2, v1v2 is an edge in E.